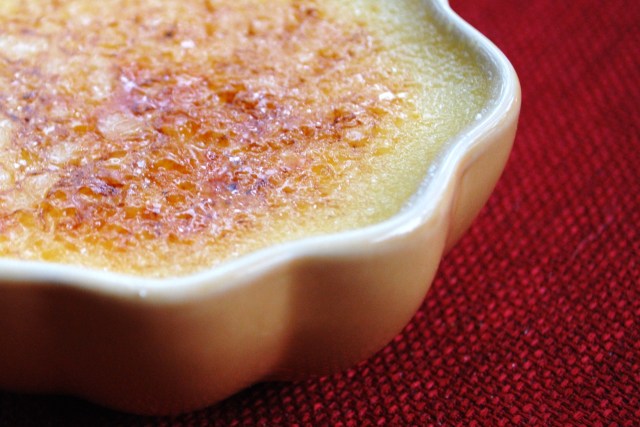 What mistake do you make in the kitchen most often?  Omitting ingredients, forgetting to preheat the oven, or maybe not setting the timer?  I’ve made all of these more than once, but I find the thing I do more than these is trying to cut a recipe in half, and forgetting by the end of the ingredient list that I’m halving the recipe and adding the whole amount of the last two or three things.  Sometimes it ends in disaster.  Sometimes not.

I almost made the same mistake with this recipe, Creme Brulee from Ina Garten’s Barefoot in Paris.  I decided to divide it in half, since I only had a pint of cream.  So I mixed together one egg and two egg yolks with half the sugar, heated half the cream and mixed it into the eggs, and then proceeded to add a whole teaspoon of vanilla instead of a half.  Then I thought to myself, I don’t really think the family will be crazy about this if I add a whole tablespoon of Grand Marnier (the original measurement), so I’ll just add . . . a teaspoon, I guess.  Lucky me, that I didn’t go ahead a put the whole thing in, I mean, extra vanilla usually can only be better, but I have a feeling all that orange liqueur in just a half recipe would have resulted in some faces being made at the dinner table.

Instead, this turned out to be the best Creme Brulee I’ve made yet.  It was so smooth and creamy, and the flavor was just perfect.  Everyone in the family finished theirs off.  I just wish I’d had enough ingredients to make the whole recipe.

Creme Brulee is actually a fairly simple dessert to make and can be done ahead of time and burlee’d right before serving.  If you don’t have a kitchen torch, just broil the desserts in the oven.  Here’s my suggestion for the best flavor:  Take them out of the refrigerator about an hour before serving so they will be cool, but not cold.  Much tastier that way.

Thanks to Suzie of Munch + Nibble for choosing this Barefoot Bloggers recipe, which you can print here.