Okay, so after browsing through my food photos I realized that I had a serious back-log of The Bread Baker’s Apprentice recipe pictures.  And since the back-to-school chaos has slowed my blogging pace down to a SLOW CRAWL leaving me like six months behind the other “Slow-and-Steady” bakers who post every two weeks, I decided to just throw them all out here in one fun bread baking blitz.

This delicious Ciabatta was made a couple of months back, and I enjoyed it at that time especially as part of this crazy-good Grilled Vegetable and Goat Cheese Sandwich.  I froze the second loaf, and now that I’m thinking about it I’ll surely be digging it out later.  For my first attempt at making this bread, it turned out pretty good.  Next time I will definitely be trying for larger holes (with wetter dough and more stretching and folding), which Reinhart says is the goal in order for this bread to be really authentic.  One of the more involved recipes in the book, it begins with a starter made at least the day before and includes lots of proofing, shaping, and folding.  It’s one that needs a little more planning, but is well worth it. 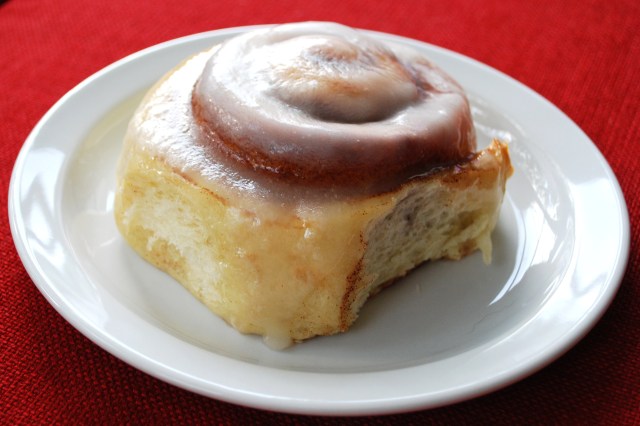 Alright, if this doesn’t make you want to go out and get this cookbook I don’t know what will.  If you want to make Cinnamon Buns that rival any food court offering, here you go.  Tender and flaky and sweet and delicious, and not really that difficult either, just a little time consuming.  My husband asks for these all the time.  Enough said.

This lovely Cinnamon Raisin Walnut Bread has golden and dark raisins and walnuts, and a cinnamon-sugar swirl baked into the middle that adds to the depth of flavor.  It’s another one of those breads you can mix up and leave to rise while running errands or doing some work around the house.  I found it to be really flexible as far as the fermentation times.  And it makes a terrific breakfast toasted and spread with some butter.

A couple of things I’ve noticed after making these and other recipes from The Bread Baker’s Apprentice – I choose to use my stand mixer to mix and knead the dough, and I find I have to add about two minutes to the kneading times suggested to get the dough to the appropriate temperature and texture.  Also, I do weigh the larger amounts of dry ingredients (flour, sugar) with my kitchen scale, but when adding dry milk I’ve found a big difference between the measured and weighed amounts and usually just measure it.

Want to give one of these recipes a try?  Preview and purchase the book here.  Now where is that loaf of bread…