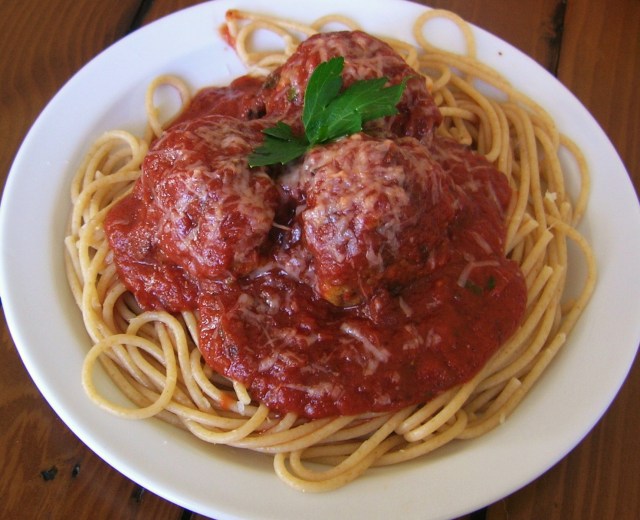 When I was a new bride, I already had a few dishes in my cooking repertoire, but I wanted to learn to make some of my husband’s favorite dishes, too.  So I asked his mother to teach me to make these recipes, and one of them was spaghetti.

Here’s what she puts in:  onion, ground beef, tomato sauce (sounds pretty ordinary so far, right?), ketchup, tomato soup, thyme, Worcestershire sauce, hot sauce, and 1/3 cup of sugar.  Not that it tastes bad or anything, I mean I had eaten it a few times before and it tasted fine, but not only is it way different than what I learned to make from my mother, but it’s almost like sacrilege to even call it spaghetti sauce, what with all the crazy things it contains.  My brain just can’t seem to accept it as spaghetti sauce.

But I make it for him sometimes, like when I have some ground beef in the fridge that I don’t know what else to do with.  And then sometimes I make something like this, Barefoot Contessa’s Real Meatballs and Spaghetti (chosen by Rebecca from Ezra Pound Cake), all tomatoey and good.  And he eats it, a lot of it, but would probably like it better if I put in a third cup of sugar.

I don’t know if it was because I was so hungry after my salad at lunch, but I thought these meatballs and the sauce were super.  The kids really liked them, too.  I kept thinking while I was making them that they were going to be bland, since there isn’t much seasoning other than salt and pepper and parsley, but mine weren’t bland at all.  I did have to make just a few changes – I used half beef and half pork, no veal (didn’t plan far enough ahead to get to the store with veal), and I only had plain dried breadcrumbs, so I added a half teaspoon of Italian seasoning to the meatballs.  I used Cabernet for the wine, and only cooked up half of the meatballs.  Also, I used whole wheat spaghetti noodles.  I will make this again for sure. (*edit-just realized I didn’t add the water to my meatball mix, but didn’t make a difference to me!)

Place the ground meats, both bread crumbs, parsley, Parmesan, salt, pepper, nutmeg, egg, and 3/4 cup warm water in a bowl. Combine very lightly with a fork. Using your hands, lightly form the mixture into 2-inch meatballs. You will have 14 to 16 meatballs.

Pour equal amounts of vegetable oil and olive oil into a large (12-inch) skillet to a depth of 1/4-inch. Heat the oil. Very carefully, in batches, place the meatballs in the oil and brown them well on all sides over medium-low heat, turning carefully with a spatula or a fork. This should take about 10 minutes for each batch. Don’t crowd the meatballs. Remove the meatballs to a plate covered with paper towels. Discard the oil but don’t clean the pan.

For the sauce, heat the olive oil in the same pan. Add the onion and saute over medium heat until translucent, 5 to 10 minutes. Add the garlic and cook for 1 more minute. Add the wine and cook on high heat, scraping up all the brown bits in the pan, until almost all the liquid evaporates, about 3 minutes. Stir in the tomatoes, parsley, salt, and pepper.

Return the meatballs to the sauce, cover, and simmer on the lowest heat for 25 to 30 minutes, until the meatballs are cooked through. Serve hot on cooked spaghetti and pass the grated Parmesan.