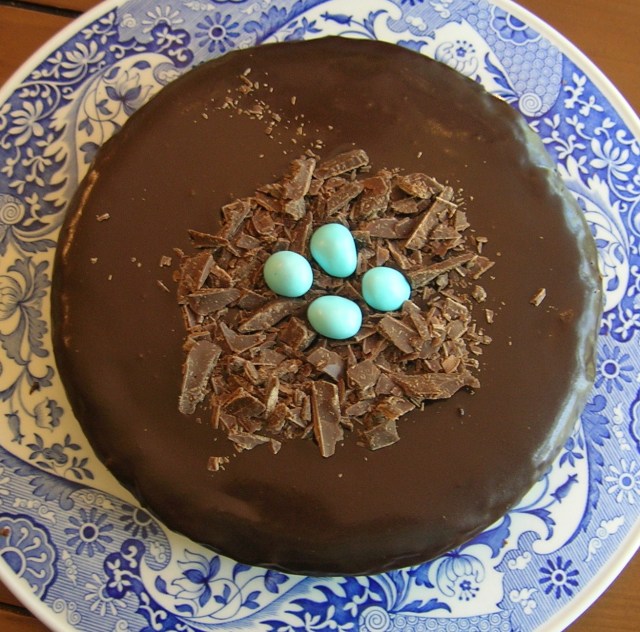 Last night my husband was watching a show on the Golf channel called The Haney Project where Charles Barkley was trying to learn to become a better golfer.  Charles says at one point something like “I just know I’m going to be the one who goes through all this and still sucks.”  I can relate.  I started taking tennis lessons with some girlfriends recently, and I can just see myself being the one who still sucks after it’s all over.  I always wanted to play tennis, but it never came naturally, and no one wants to play with you if you can’t hit the ball back.  I even took tennis as a course in college, but it soon become apparent that everyone else already knew how to play, and were just doing it for the A.  Well, that’s not what I got.

I have some failures in the kitchen, of course, but most of the time cooking and baking do come naturally.  Making something like this Chocolate Amaretti Torte, chosen by Holly of Phe/MOM/enon for this week’s Tuesdays with Dorie recipe, is a nice challenge.  The torte is unique because the thin cake is made from crushed amaretti cookies (Italian macaroons) and almonds.  Also, all of the cake batter is mixed together in the food processor.

Be forewarned:  The 15 minute part applies only to the cake (if you have already softened your butter), and not the ganache glaze or optional almond whipped cream.  The amaretti cookies recommended by Dorie in the cookbook are a little difficult to find if you don’t live in a large metropolitan area.  As a result, some TWD bakers made their own amaretti cookies, and others used some sort of substitution.

I chose to substitute with some almond cookies, which seemed to work fine, but I’m sure the authentic amaretti cookies would have given the cake an even more sophisticated taste.  The cake bakes up dense, nutty, and super chocolaty with a nice almond flavor.  The ganache glaze that covers it adds even more richness (love ganache).

I served it with the almond whipped cream (not a hit, but I saw where someone used amaretto liqueur in theirs and that sounds even better) and homemade coffee ice cream.  The general consensus of the family was that it was good, but not spectacular.  The recipe kind of baffles me, I can’t figure out the point of adding the cookies.  If I happen to run across some Italian macaroons sometime though, I might try it again.

But for now, like Charles, I’ll just keep working on my game. 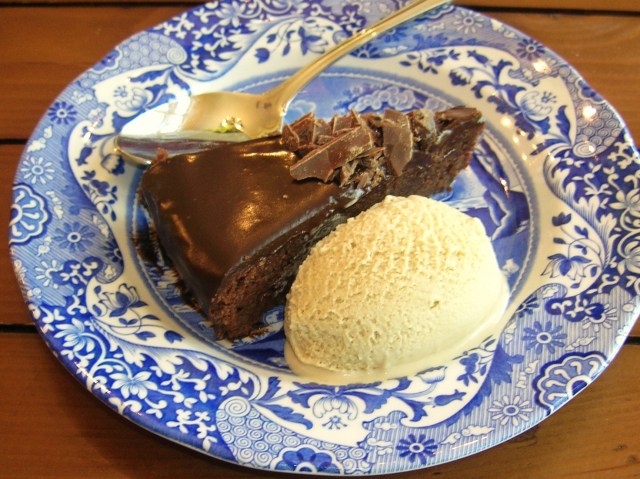